HYBE, home to K-pop group BTS, has seen its borrowings more than triple in 2021 after a string of acquisitions, according to its annual report, as the South Korean entertainment company looks to grow and diversify its revenue sources.

Its cash flow statement showed that HYBE paid 20.1 billion won ($16.5 million) in interest last year, more than a six-fold increase from the year before. Interest expense in the income statement also sharply rose to 13.2 billion won from 3.9 billion won in the same period.

Despite a significant increase in borrowings, HYBE has maintained a net cash position. Its 2021 earnings before interest, tax, depreciation and amortization were 273.5 billion won, much higher than interest expense of 13.2 billion won, while operating cash flow amounted to 177.2 billion won.

Free cash flow, calculated as operating cash flow less capital expenditures, stood at 82.6 billion won in 2021, which can be used for various purposes including to pay down debt, to spend on acquisitions or to pay out dividends to shareholders. 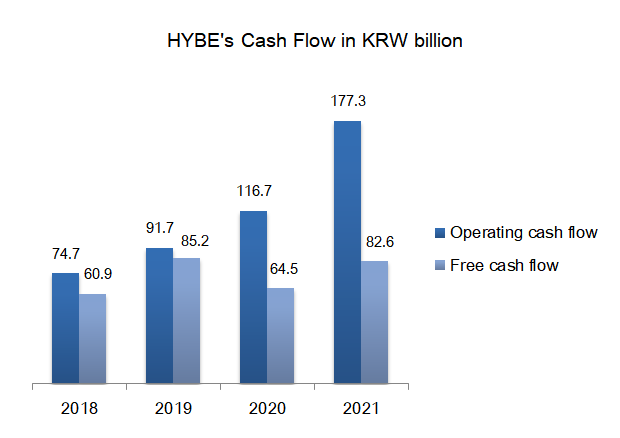 Some of HYBE’s shareholders asked for an increase in shareholder returns during an annual general meeting on March 30. In response, HYBE chief financial officer Lee Kyung-jun said the company’s revenue has grown “at an annual average rate of 50% in the most recent three years” and stressed that reinvesting in growth, rather than shareholder returns, was “the right direction for the company”. (Reporting by Choong-hee Won)
< 저작권자 ⓒ 자본시장 미디어 'thebell', 무단 전재 및 재배포 금지 >