Hanon Systems writes off goodwill related to its Beijing unit Entire goodwill of $14.5 mil was impaired in 2021 due to lower growth projections

Some 17.8 billion won ($14.5 million) of goodwill assigned to Hanon Beijing was all written off in 2021, according to the company’s annual report. There was no goodwill impairment for the company’s other cash generating units, with the amount of goodwill carried on the balance sheet totaling 862.7 billion won at the end of last year on a consolidated basis.

Goodwill, which is the excess of purchase price over the fair value of the identifiable net assets, is tested annually for impairment. Under the International Financial Reporting Standards, if the book value of the cash generating unit exceeds the recoverable amount, an impairment loss is recognized.

The company’s accounting firm has closely watched Hanon Beijing since 2020 as the unit’s growth projections have declined.

The growth assumptions were significantly lowered, largely because the Chinese auto industry has slowed down due to supply chain disruptions and geopolitical factors. The Beijing unit’s book value also declined by 34.3 billion won to 105.5 billion won at the end of 2021.

Hanon Beijing recorded revenue of 150.7 billion won and its first net loss of 15.2 billion won in 2021, with net profit having declined for most of the past six years. 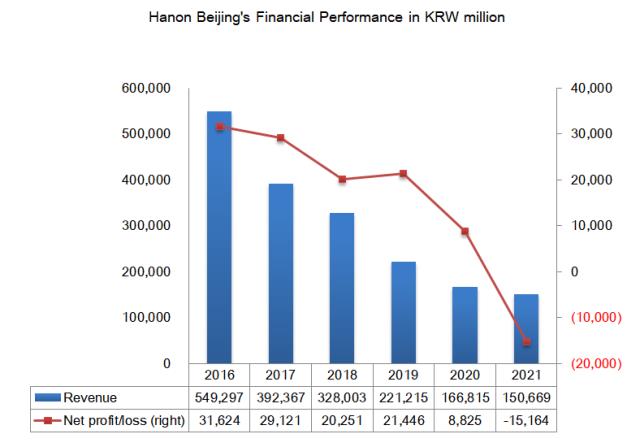 Hanon Systems plans to focus on China’s electric vehicle sector as China is the largest electric car market in the world and electric vehicles account for a growing portion of the overall car sales in the country.