Life Asset Management has called for SK Inc, the holding company of South Korea’s SK Group, to cancel part of the repurchased shares and strengthen the company’s risk management capabilities.

“Treasury shares held by SK Inc at the end of 2021 accounted for 24% of the company’s total issued shares,” the Seoul-based asset manager said in an open letter to SK Inc’s board of directors and management dated on April 25.

Life Asset Management urged SK Inc to cancel 10% of the treasury shares, or 1.8 million shares, saying the firm believes that "will lead to a major revaluation of the company’s stock in the market”.

The request followed US hedge fund Dalton Investments’ letter to SK Inc’s directors in early April, urging the holding company to focus more on share buybacks and cancelations than dividends.

Last year Jang Dong-hyun, vice chairman and chief executive of SK Inc, unveiled a goal to boost the stock price to 2 million won ($1,576) a share by 2025. As part of efforts to increase shareholder returns, the company announced a plan to buy back shares equal to 1% of its market capitalization annually by 2025 at its annual general meeting in March.

Based on SK Inc’s market value of approximately 20 trillion won on April 28, the company is probably going to buy back shares of about 200 billion won, or some 740,000 shares, this year

However, SK Inc already held over 18 million treasury shares at the end of 2021, representing 24.4% of its total issued shares. One of the most effective ways for the company to increase the value of its “undervalued shares” is by canceling part of its treasury shares, Life Asset Management said in the letter. 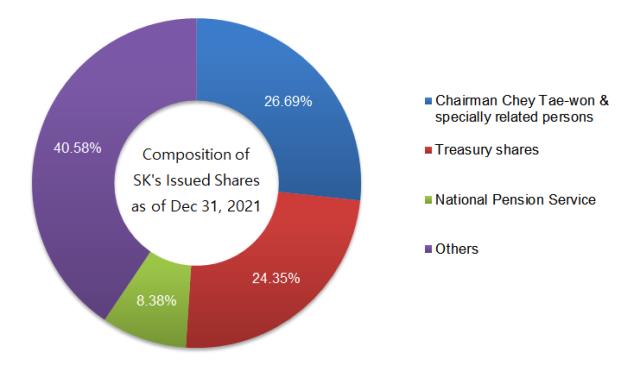 Some South Korean companies are reluctant to cancel treasury shares because they can be used in various ways, such as to defend a takeover attempt by reinstating their voting rights and to pay in stock for stakes in other companies. Treasury shares are also often used for share-based compensation to employees.

Many expect SK Inc to respond positively. “We will consider share cancelation as one of the possible options for shareholder returns,” Lee Seong-hyeong, finance chief of SK Inc, said during the company’s latest annual general meeting.

Life Asset Management also proposed SK Inc create a chief risk officer role and a risk management committee within its board. The asset manager said SK Inc needs to strengthen its risk management capabilities, especially after the company has revamped its business structure in a short period of time with a focus to transform itself into an investment holding company.

SK Inc does not have a CRO or a risk management committee. But the company said it has a framework in place to ensure proper risk management in its investment decision-making process.

“We currently don’t have an executive dedicated to risk management or a risk management committee, but we are continuing to make efforts to minimize risk throughout our multi-step investment decision-making process,” an official at SK Inc said.

SK Inc established an environmental, social and governance (ESG) committee within its board in 2021. The ESG committee, which comprises six of the board’s nine members, is responsible for overseeing the company’s investments, in line with efforts by the company to integrate ESG factors into its overall business strategy. (Reporting by Eun-a Jo)
< 저작권자 ⓒ 자본시장 미디어 'thebell', 무단 전재 및 재배포 금지 >