Korean Air, part of the Hanjin Group, is considering multiple options for low-cost carriers owned by Asiana Airlines, as the country’s largest airline is outlining plans for post-merger integration with the second largest carrier.

In November last year, Hanjin KAL, the holding company of the Hanjin Group, reached an agreement with KDB, the main creditor of Asiana Airlines, to acquire the struggling carrier through Korean Air in the largest deal ever in the country’s aviation industry. At the time, the two parties said the deal was expected to close in the second half of 2021.

There is no change in the timeline, according to sources. But even if the deal is completed as scheduled, the launch of a combined entity of Korean Air and Asiana Airlines will likely take time because of restructuring efforts to streamline redundant operations and overlapped routes. 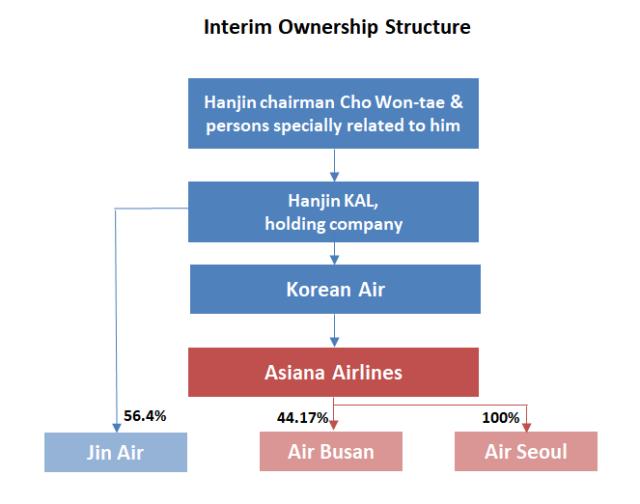 Asiana Airlines has two low-cost arms, Air Seoul and Air Busan. It owns 100% of Air Seoul, while holding only a 44.17% stake in Air Busan.

Observers have been skeptical about the likelihood of Asiana Airlines purchasing the remaining stake in publicly-traded Air Busan, with some expecting that a merger between Air Busan and Jin Air, Korean Air’s low-cost arm, is more likely.

Another option is that Hanjin KAL or Korean Air buys Asiana Airlines’ stake in Air Busan, which would make the low-cost carrier the first or second-tier subsidiary of Hanjin KAL. According to fair trade regulations revised last year, a holding company is required to hold 30% or more of its first and second-tier subsidiaries.

“The situation is up in the air. (Korean Air and KDB) are considering a range of options including a merger or sale,” a person close to the matter said. “If they choose to sell (Asiana Airline’s stake in Air Busan), they could try to find an outside investor or sell it to higher-level companies (within Hanjin’s ownership structure).”

He added: “All options will be discussed based on the key principles, which are to retain jobs and create synergies.”