Samsung’s controlling Lee family is set to sell part of their shares in the South Korean conglomerate’s key affiliates, reducing a collective stake in Samsung Life Insurance held by the family members, a move that will help the insurer to avoid increased scrutiny from the country’s competition regulator.

Lee Seo-hyun, the younger daughter of Samsung’s late chairman Lee Kun-hee and chair of the Samsung Welfare Foundation, signed a contract on October 5 to sell 3,459,940 shares or a 1.73% stake in Samsung Life Insurance through a trust, industry sources said.

Her mother, Hong Ra-hee, and elder sister, Hotel Shilla’s chief executive Lee Boo-jin, will also dispose their 19,941,860 shares (0.33%) in Samsung Electronics and 1,509,430 shares (1.95%) in Samsung SDS, respectively, in the same way. Kookmin Bank will handle the sale of the shares on their behalf.

The decision is largely seen as part of efforts by the owner’s family to fund a massive inheritance tax bill of more than 12 trillion won ($10 billion), which was imposed after the three and Lee Jae-yong, the late chairman’s son and vice chairman of Samsung Electronics, inherited shares in the conglomerate’s key affiliates in April.

A revision of the country’s fair trade law, effective December 30, 2021, will make companies in which members of the owner’s family hold a combined 20% stake or more subject to tougher regulations in regard to business matters such as intercompany transactions. The threshold has been lowered from the current 30%.

The Lee family together owns 20.82% of Samsung Life Insurance at the end of June this year. If the sale of Lee Seo-hyun’s 1.73% stake in the insurance company is completed, their ownership interest will decline to 19.09%, slightly below the new threshold of 20%. 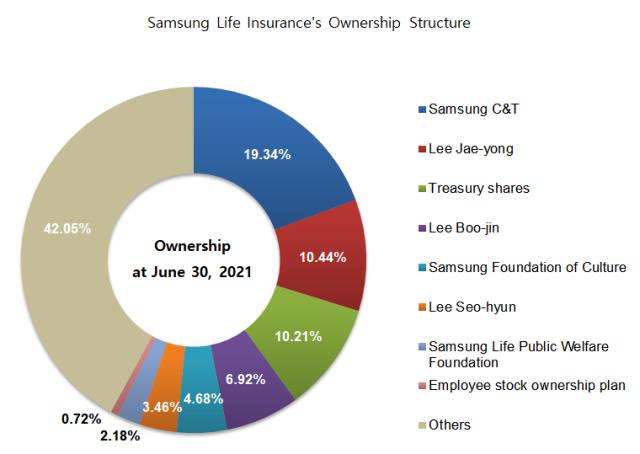 Any violation of the competition law, especially in regard to intercompany transactions for the purpose of wealth preservation of the owner’s family, could put a conglomerate at major legal risk as its head can be reported to prosecutors.

“I think the share sale is aimed both at raising funds to pay inheritance tax and avoiding stricter scrutiny from the KFTC,” said an industry insider.

It is likely that Samsung Life Insurance will accelerate new businesses going forward. Samsung’s four financial services affiliates, including Samsung Life Insurance and Samsung Card, in April announced a plan to spend a combined more than 30 billion won to jointly build an integrated platform for their clients.

The announcement came as the insurer’s entry into the MyData business has been delayed due to the financial regulator’s pending decision on the company’s handling of intercompany transactions. (Reporting by Eun-sol Lee)
< 저작권자 ⓒ 자본시장 미디어 'thebell', 무단 전재 및 재배포 금지 >