South Korea’s sovereign wealth fund Korea Investment Corporation (KIC) has seen its allocation to alternative assets decrease for two straight years, 2019 and 2020, in contrast to most of the other domestic institutional investors seeking to expand their exposure to asset classes such as private equity, infrastructure and hedge funds. 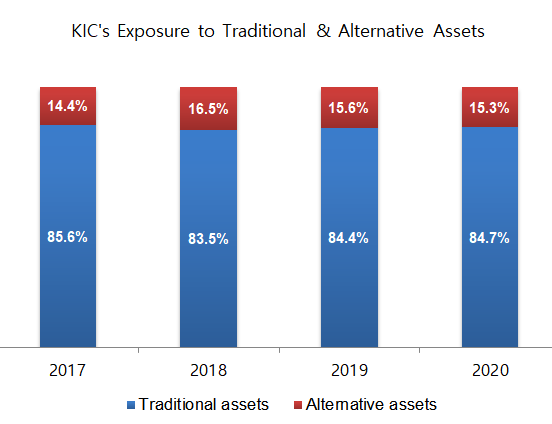 This contrasts with moves by other South Korean institutions investors, including pension funds and mutual aid associations, which have ramped up investments in alternative asset classes in recent years in an effort to enhance returns and diversify beyond traditional assets such as stocks and bonds.

These seemingly opposite trends were pointed out by lawmakers during a 2020 inspection of state administration. They called on KIC to increase its allocation to alternatives and come up with ways to manage liquidity by following practices of its global peers which earn stable and high returns through diversification into alternative investment strategies.

In its recent report submitted to lawmakers, KIC explained that a decline in exposure to alternatives was caused by stellar returns on traditional assets and therefore will be temporary.

The sovereign wealth fund’s traditional asset portfolio gained 16.6% and 14.6% in 2019 and 2020, much higher than returns of 9.0% and 9.2% from investments in alternative assets for the respective year. 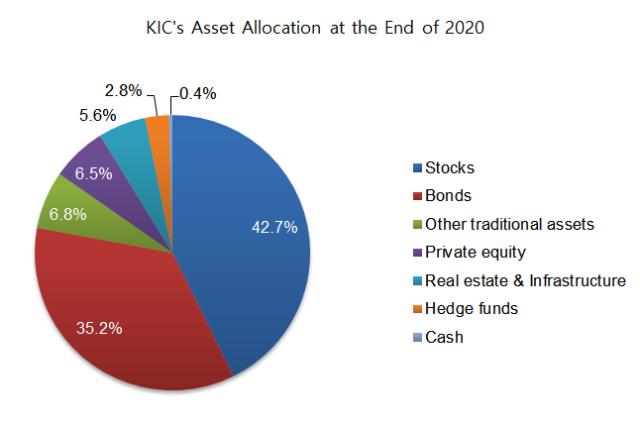 “An aggressive increase in the allocation to alternatives in a short period of time could lead to exposure concentrated in funds of a certain vintage,” KIC said. “We plan to increase new investments gradually each year to earn stable returns.”

KIC also said that, given the illiquid nature of alternative assets, it is managing alternative investments not to exceed a preset limit and that it updates its liquidity contingency plan on an annual basis to be prepared for crisis.

Lawmakers also demanded last year that KIC expand investments in companies with innovative technologies. KIC said in the report that it is exploring such investment opportunities in partnerships with other domestic institutions. As part of such efforts, KIC announced a joint venture with South Korea’s NongHyup in July last year to ramp up private equity investments overseas.

KIC had $183.1 billion in assets under management at the end of 2020, with exposure to alternative investments accounting for 15.3%. (Reporting by Hee-yeon Han)
< 저작권자 ⓒ 자본시장 미디어 'thebell', 무단 전재 및 재배포 금지 >